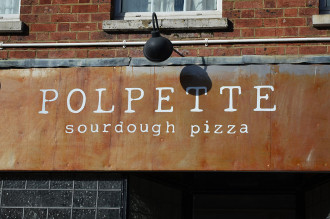 The shopfitters at Polpette pizza installed some aged metal sheeting to their fascia and varnished it as a background to their shop sign. I hand lettered the Polpette logo on using 1shot lettering enamel. Theres a bit of a long (and probably boring) to this one about the pounce pattern getting lost at Waterloo station. It was pounced onto paper in Slough, made its way to London and I lost it in Waterloo station by the ticket machines (i think). The long story is about the effort I put in to trying to find it again, unfortunately I didnt find it again. Once back in Bournemouth I re-drew the logo from scratch. I also painted a chalkboard for the chef’s specials on the wall inside the building. Polpette is a lovely restaurant in Canford Cliffs specializing in true Italian stone baked pizzas.Â I’m sure its worth mentioning that while I was painting the chalkboard the environmental health inspector showed up, did her checks and gave them a five star rating : ) 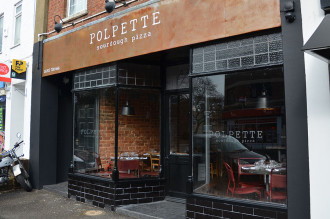 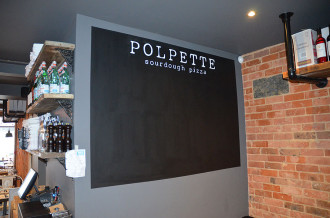 Approximately a year after the first Polpette openened in Canford Cliffs I got the call regarding a second restaurant opening local to me in Southbourne, Bournemouth. The first job was to paint the fascia, again on rusted and lacquered steel, and to create a blackboard on an interior wall and signwrite the Polpette logo onto it. Later I painted an interior mural, a white on grey painting of the bay of Naples, and lettered an exterior sign protruding from the shop front. Polpette has really won me Â over with the pizzas they produce, extremely high quality with fresh ingredients. I hope that more Southbourne shops will opt to have traditional signwriting as it really suits the village feel of the area. Being a Southbourne signwriter it’s a pleasure to work on the Grove and enjoyed this job thoroughly. 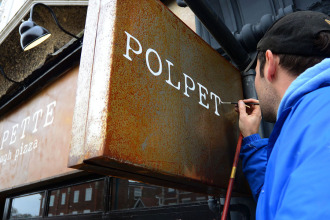 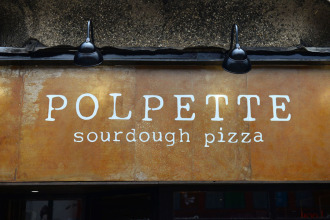 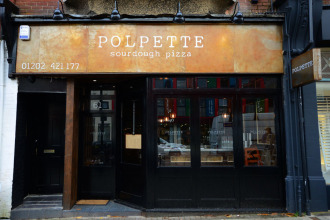 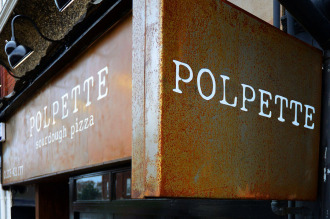 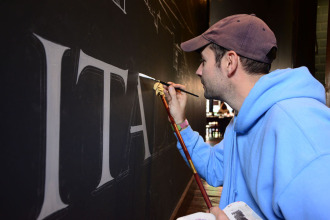